Learning to do paper piecing has been on my list for YEARS!  I have had a general idea of how it works but have never tried.  (Well, I THOUGHT I had a general idea, but after taking a class I have learned that I wasn't quite right...)  I always admire the fun paper pieced blocks that I see on Instagram.  There is an endless amount of designs!  And, after piecing the cactus block for my daughter's Easter Basket, I knew that there HAD to be a better way to create cute picture type blocks than trying to piece teeny tiny squares into triangles and such.

So, when I noticed that there was a paper piecing class at Mill House Quilts in Waunakee, Wi on the last Friday of my Spring Break, I decided to sign up.  Spring Break was kind of yucky this year.  The weather was blah, we didn't travel, my daughter had her wisdom teeth out and I had a tooth fixed, there were other appointments and studying for APUSH...not much in the way of fun.  Driving, by myself, an hour and a half to take a three hour class and then driving, by myself, home, seemed like just the ticket!

And it was!  Friday was a lovely morning, and it's such a pretty drive.  The Rock River and the Craw Fish River both run along the rural highways that I needed to take.  With the rain (and April snow) that we've been having, the rivers are both high and very visible from the road.  I know that parts of my route had endured some pretty severe flooding recently, but Oh, My!  With all the shades of  new spring green on the ground and in the trees, and the clear blue morning sky, the river views that I spied on my way to Mill House were just breathtaking.  I thoroughly enjoyed the drive there, complete with a cup of coffee and my favorite station on the radio.  When that station went out of range I finished with a Beatles CD.  Perfect. 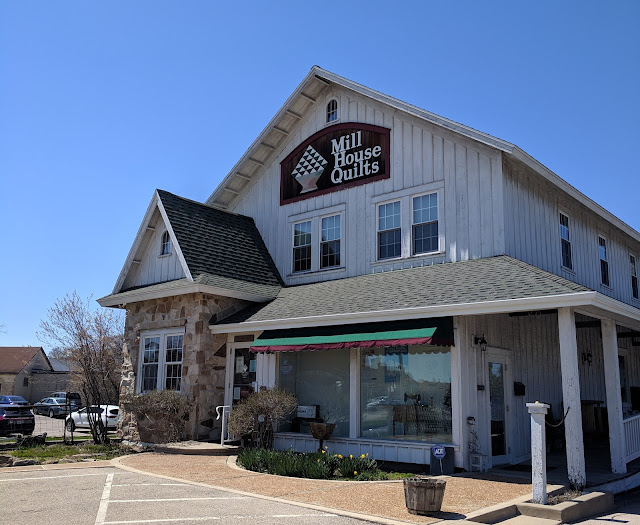 I had never been to Mill House Quilts before.  It's a beautiful shop in a really pretty little town.  The building, as you can guess from the name, is an old mill that is situated next to the railroad tracks.  When I arrived, I headed straight up to the large classroom on the upper level, but I really wanted to explore the shop!  It has a cozy and inviting feel, despite its large size.  Luckily, there was time for that after class.

The class was taught by Kathy Doyle .  There were only three of us in the class, so we had lots of individualized attention.  It was so nice to get to chat with the other ladies, even if I will likely never see them again.  I so wish I had real life friends who quilted.  I really enjoy those connections.  The bit of time spent in this class has strengthened my resolve to get myself to a quilt retreat soon!

We were told to bring our own paper piecing pattern to the class.  Some suggestions were made on the materials list, but evidently those were only available for purchase in the store.  Since I had never been there, and it wasn't specified, I didn't know that.  I searched online for them, but without luck.  I ended up browsing through a LOT of  web sites, and settled on some fairly traditional blocks. I took two options along, since I wasn't really sure which would work best.   I wanted to do something more....pictorial...but many of those had lots and lots of really tiny pieces and looked very intricate.  I knew that if I was going to have a good experience I needed to start out basic and with something  I could complete.  The other two quilters in the class had chosen the same pattern, and both completed just a small portion of it in the time allotted.  But, the little cats and stacks of quilts they did complete were darling! 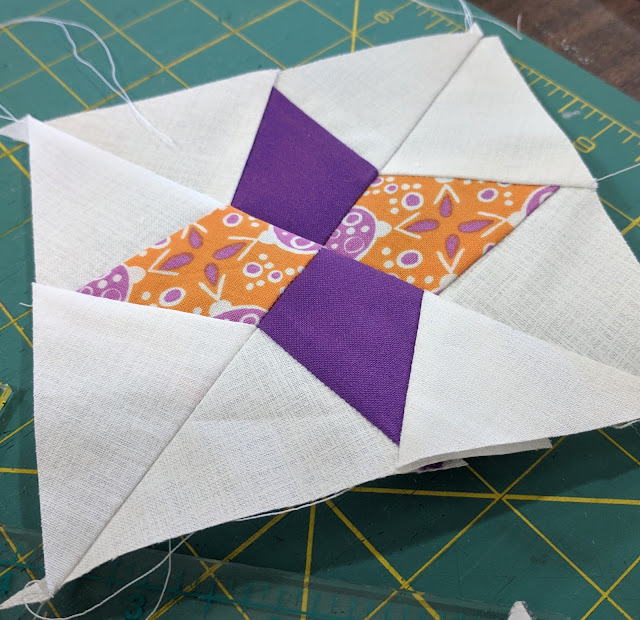 Once I understood the process, I was able to work pretty quickly through my little "hummingbird" blocks.  The most challenging part was making sure that my fabric was positioned correctly so that it would cover the intended space after sewing.  I took more than one seam out because it didn't fit.  I learned to use larger pieces, and to always flip before sewing.  I think that with practice I will work out a system that works for me, and I think that judging the angle of the pieces will become easier.

One thing that bothered me a bit about the process is that it seemed to create a lot of waste.  Maybe t was because I was using such large pieces to  ensure that they covered the space, but I kept feeling like I was ending up with SO many oddly sized scraps that wouldn't really be usable in another way.  I suppose that's just a fundamental difference between piecing and paper piecing.  But, if anyone has a tips about this, I'd love to hear them!

I really enjoyed the process of removing the papers once the block was finished.  Its so satisfying!


I'm not sure yet what I will do with the 4 cute little blocks I completed during the class.  They will hang on the design wall for a bit, as a happy reminder of a lovely day, while I finish some things from my Second Quarter Finish Along list.  Eventually, maybe they will become a pillow or a mini quilt or even a table runner.  I'm looking forward to another opportunity to do some paper piecing.  I hope  don't forget how!

After class, I was in no hurry to rush home. So, I spent about an hour browsing in the shop.  There was a lot to see!  I generally don't buy fabric without a specific purpose, but I made an exception to celebrate my "spring break adventure."

I'm so glad I took a day for myself and visited Mill House Quilts.  It was such a lovely day.  I will  visit again, and I won't hesitate to look for more classes to take!

Hello There! I'm Tami. I'm a wife, mom, teacher, and quilter, among many other things. I have a full, happy life, and I work at balancing all the WONDERFUL things that fill up each day. There's not a lot of room for "free time" in my daily routine, but when I find some, you can bet I'll be sewing. Come on in, take a look around, and be sure to say hi!