I believe that sometimes the universe sends me messages.  When a topic or an idea keeps coming up, in multiple and unrelated places, there's a reason. I have learned to pay attention!  I also tend to believe that on the nights I can't sleep, and I click randomly from one blog to another, my destination sometimes isn't really random.  It's something I'm meant to see.

One night, sometime in the last two months or so, I was having one of those nights.  I had read everything in my Bloglovin' feed, Instagram hadn't given me anything new for hours, and Facebook...meh.  So, I started just clicking on blogs I'd never heard of in some blogger's sidebar list. Somehow, I ended up reading about The 70273 Project.

Jeanne Hewell-Chambers is the force behind this project.  I don't know Jeanne personally, but I can tell you that she is an amazing woman.  She is kind, generous, driven and charming.  She has a tendency to call people "Sugar," and I imagine that when she meets someone for the first time, they are greeted with a huge hug.  She is a writer, storyteller, artist and quilter.

Jeanne, apparently. believes that the universe sends her messages, too.  She was led to launch an amazingly ambitious quilting project after watching a documentary.  Through the documentary, Jeanne learned that between January 1940 and August 1941, 70,273 physically and mentally disabled people were murdered by the Nazis.  The Nazi doctors who "evaluated" the medical records of the disabled individuals were instructed to place a red X on the file if the person was deemed "unfit" or "a burden to society." Three doctors read each file, and when two of them made a red X, the person's fate was sealed.  They were murdered almost immediately.

I'm going to encourage you to visit Jeanne's blog and the website for The 70273 Project to learn more about the atrocities carried out on the most vulnerable members of society before the Holocaust even began.  But, I want to tell you about the way Jeanne has felt called to do something to honor the memory of those who died.  Because, I think you will be moved to help her.  I am.

Jeanne has set out to commemorate each of the 70,273 people who died needlessly with a quilt block.  Each block will feature two red X's (representing the marks that designated their fate) on a white background (representing innocence and the paper on which the reports were written).  That means, she is making, collecting, and cataloging seventy-thousand-two-hundred-seventy-three blocks!  The blocks are being pieced into tops, and eventually, quilted.  When all the quilts are complete, they will be exhibited wherever and whenever they can be.  I believe Jeanne intends to not only honor the memory of those who died, but also to change the hearts of those who will see the quilts. 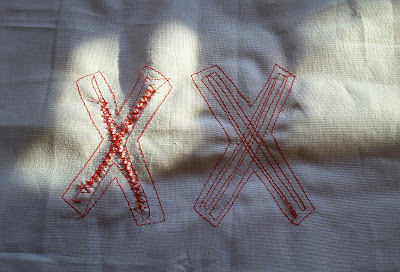 Now.  I said at the top of this post that the universe sent me a message, right?  So, the day after I read about The 70273 Project, my girls and I were at the library.  My youngest had placed a hold on a book that some of her classmates had read called "The War That Saved My Life."  I knew nothing of the book, but was happy when she announced that she wanted me to read the book with her.  I think that you are NEVER too old to have a book read to you, and my girls and I have spent some very hours reading out loud together. 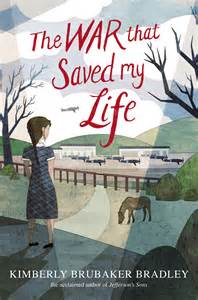 This is a beautiful book.  An amazing example of how children's literature is NOT just for children.  It is set just before World War II, in England.  The heroine, Ada, is a ten year old girl with a deformed foot.  She has been cruelly mistreated by her mother for her entire life because of that foot.  But, when the children of London are evacuated to the country side in anticipation of the war, Ada manages to join her brother, Jamie, on a evacuee train.  They escape their mother and find a new life. Again, I want you to read this book for yourself, so I'm not going to reveal more of the wonderful, suspenseful, hopeful, heart-raising story.

But, can you imagine my goosebumps as I realized that this story had come into my life immediately after learning about Jeanne's project?  Now, I know the connection is not direct.  Ada is a fictional character who wouldn't have been one of the 70,273 victims in Nazi Germany, had she been real.  But surely, one of the files with two red X's could have belonged to a girl with the same spunk and grit, marked by an accident of birth.  The universe speaks! 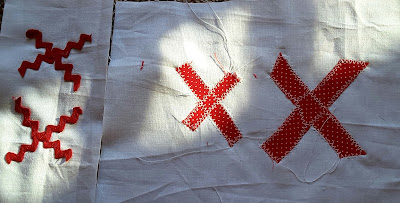 Wait!  There's more.  I had just finished reading "Wonder", another Young Adult novel that focuses on the power of the human spirit to overcome disability and disfigurement.  It's another book you simply must read.  As my older daughter and I were discussing "The War That Saved My Life", and how it connected to The 70273 project, she said, "Oh Mom, wait until you get to the Julian Chapter!"  She was referring to a companion story to "Wonder" which is told from the bully's point of view.  I couldn't wait to find out what her cryptic comment meant, so I sat down to read right away.

Well.  Universe, you did it again!  In "The Julian Chapter," Julian's grandmother tells him a story about her childhood in Nazi-occupied France during World War II.  She was hidden for two years by the family of a boy who had physical deformities and had been teased and tortured by his classmates prior to the war.  The grandmother tells about how she learned to accept and love him, and, about the day that he, and all the other "cripples" in the village were rounded up by the Nazi soldiers and led away, never to be seen again.

I read this chapter through tears.  It was clear to me that   these stories my daughters were reading were placed into my hands at this moment in time to lead me to act.  There is a precept mentioned in Wonder and The Julian Chapter that says:  If we do not examine the past, we do not learn from it. 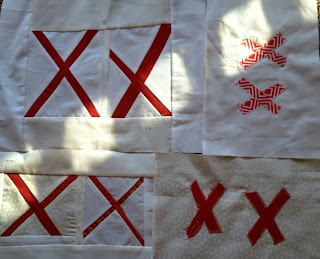 I think that's what this is all about. My responsibility right now, is to learn, talk and teach about this period of history in order to move hearts so that something like this can never happen again.  I don't know yet, exactly what direction this will take in my life.  But, little by little, I see pieces coming together.  I work with children with disabilities.  I see the degree to which they are accepted...and not...in our school.  I see good kids, swayed by the power of one, loud and ill-intent voice, make choices to exclude rather than include. I have already volunteered to work with our 5th graders (my daughter will be one of them) on a quilt making project as part of a Civil War unit.  Perhaps, this is the follow up project.  Perhaps those 75, 5th graders will be learning about red X's on white quilt squares, too.  I don't know yet.  But I am Led. To. Do. Something.  For now, I am making blocks.  It's a start.

Whew.  Are you still there?  This has been a long and rambling post.  I apologize. I feel strongly, though, that I needed to tell you about these books and about this project, so that you too, might be moved to help.

Imagine, for just a second, what 70,000 quilt blocks will look like.  How on earth will one woman pull this off?  The truth is, she won't.  Not alone.  Jeanne has enlisted a small army to get the job done.  She is inviting anyone and everyone to make a block, several blocks, a quilt top's worth of blocks. The blocks  need to be three specific sizes.  Details can be found here.  Jeanne also needs piecers and quilters, and people who can help with other aspects of the project. You can find the details and all the ways you can help here. 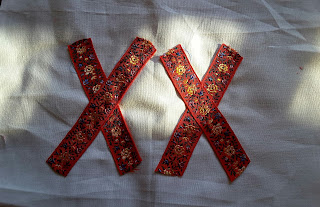 Will you help?  Will you make a few blocks and send them to Jeanne?  They are simple, and you can use any method you want, as long as the x's are red and the background is white.  There is a form you need to fill out and send with your blocks.  You can find that here.  Also, please tell others about The 70273 project.  Tell those who might make blocks (your quilting friends, you guild, your family) . but also those who won't.  It's about cultivating acceptance and sharing love.

Quilters know how to do both.

Linking up,with Let's Bee Social  and Can I Get A Whoop Whoop to help spread the word!

Labels: books, quilting for a reason, The 70273 Project

Hello There! I'm Tami. I'm a wife, mom, teacher, and quilter, among many other things. I have a full, happy life, and I work at balancing all the WONDERFUL things that fill up each day. There's not a lot of room for "free time" in my daily routine, but when I find some, you can bet I'll be sewing. Come on in, take a look around, and be sure to say hi!